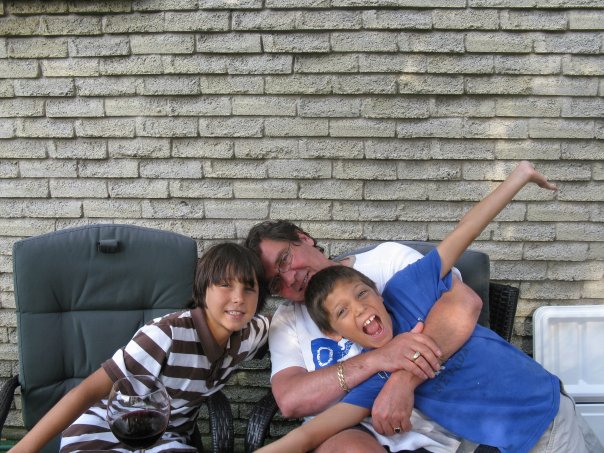 It’s been a personal ritual for years. I’ve done it alone and kept it private… until now.

Playing Santa around town for an afternoon has been my favorite day of the year. This year, the time had come to share the experience, for two reasons.

The first is that part of the work I do involves encouraging adults to instill better belief systems in children. Sounds like a corporate quality-control statement, but in essence, I’m striving to educate parents, and those adults who influence children, about planting the all-important seeds of self-worth and community service, at an early age. This has been a long-time mission of mine and sharing this story with you now, would help me in that regard.

The second reason is that I didn’t venture out alone on my annual errand this year …on purpose. Instead, I chose to have Corbin and Cameron, my two, fabulous, visiting grandsons tag along with me.

See, an important part of what I want to help teach them, are the ways to serve and to give unconditionally, so they can start the process of paying forward, at the ages of 11 and 10.

To be a part of my small Joyeux Noel excursion I believed, would give them an example of those things—at least “Papa” style.

Adding joy to the occasion, my youngest daughter, Teri, would also be visiting and share this day with us.

December 22, 2010 will now be known in our family as the Nintendo Turkey-Run Day.

It started with an early December call to my local Children’s Aid Society. When she picked up the phone, Debra started our exchange the way our first meeting ended last year—she teared up, saying she had been fervently hoping I would call again this year. Last year, I delivered the CAS a boy’s flashy red bike. Debra had burst into tears when she came down to the lobby, realizing that she had the perfect child in mind, to find the bike under the tree on Christmas morning.

This year, I decided that instead of selecting a random present, hoping it would luckily “fit” a certain child, I would ask Debra to poll her case workers and identify a child who was having an especially tough time. She happily agreed.

A few days later, she left a voice mail that a young boy in their care, who was having an extremely challenging year, had put a blue Nintendo DS on his Santa wish list, for two years running, which the family could not afford. All his buddies had one. So that very day I bought the biggest, baddest, blue DS there was, in advance of Corb and Cam’s arrival, just in case the stores sold out.

My second call was to the downtown Salvation Army hostel. Last year, I hauled bags of turkeys and fixins up to their second-floor kitchen and dining area, where they serve 30 residents and 70 homeless men, a hearty festive meal on Christmas Eve. I pledged my delivery again this year, so they could plan the feast accordingly, but this time, the plan was to have the boys help me buy the groceries, with a little of their own spending money, and deliver, the food as well.

Their train arrived 40 minutes late. Flying into my arms as they disembarked, the usual drill when we reunite after months of missing each other, we were soon off to the grocery store. Teri and the DS gift were already in the car. What was especially wonderful is that, once Teri heard of my plans, she decided to participate by bringing her own, gently-used DS, to be an unexpected gift for another child at the CAS.

Before heading out of the parking lot, I had both my excited boys settle down, to listen to something Papa had to say. They were attentive as I explained that before going home, we were going to run some errands. “Special errands,” I told them.

After outlining the three stops we were going to make, I asked them if they would help me buy the groceries. Instantly, Corbin pulled out the twenty dollar bill his mother had given him to safeguard on behalf of both brothers and excitedly said, “Papa, here!” With a warmed heart, knowing I wouldn’t let them spend the whole amount, I replied, “Let’s wait until we get to the grocery store.”

The aisles were expectedly crowded, as we wielded two carts towards the back of the store to load up one with five turkeys. Next, we wandered over to the bunkers in search of the frozen veggies the cooks at the SA prefer. Bags of string beans, peas and corn filled the bottom of the other cart. En route to topping off that cart, with cans of jellied cranberries and tomato juice, Corbin, always the comedian, as we were passing the canned beans picked up a tin of navy beans and asked, “Papa, what about a can of navy beans for the army?”

Speaking of which, after ringing up the two carts of groceries the cashier remarked that I must be “feeding an army”. I replied, “Well, yes I am as a matter of fact.”

And when Corbin realized that I forgot to ask him to use his and his brother’s money, to help pay for some of the groceries, he again flashed the twenty in front of me. I told him we’d deal with it later. Later came sooner, as we passed a Salvation Army officer on the way out of the store. Corb grabbed my arm and told me he wanted to put the twenty dollar bill in the kettle—and he did!

Before meeting with Debra, while waiting in the lobby, I explained the work the CAS did to the boys. Cameron then told me about a young girl he and his brother befriended, who was abused by her mother. The young woman is now under the care of the CAS in their city and spends a lot of time with the boys at their home. They were already doing the good work of the Universe!

Debra led us all into a meeting room where she explained her role in the organization and why we shouldn’t forget the children, especially at times like Christmas. To her utter surprise, we handed over not one, but two DS’s and for the third time since meeting her, she cried.

The Salvation Army was buzzing with activity when we arrived, but this time I had help lugging the bags upstairs. Paul, the director, was only too happy to see us and the women in the kitchen were bubbling over with gratitude. Later that day I received another thank-you—a Tweet from Paul.

When we finally arrived back home, I asked the boys to get a sheet of paper and tell a little story about what they had just done. I suggested writing about such things as what they did, why they did it, who it would make happy and how it made them feel.

Cameron wrote: “I did it because it would make the child’s Christmas and I’d help feed the men that hadn’t eaten all week and lived in cardboard boxes.”

Corbin wrote: “It’s going to make people feel like someone cares about them. It made me feel good, because I know I am doing a good thing.”

I am writing this the day after the Nintendo Turkey run, on December 23. I am driving Teri and the boys back to our hometown tomorrow, to celebrate Christmas with the entire family. On Christmas morning, I will awaken to the glee of my grandsons rifling through their gifts and the four of us will have a bit of a glow on, knowing that those few hours we played Santa, will have made the smiles of two children and 100 indigent men just a little brighter.

What I know for sure is that there’s no greater feeling in the world than giving.

My great hope is that this little tradition of mine, or something like it, continues and grows in the hearts and minds of two very special young men—Corbin and Cameron! 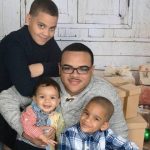 What My Kids Taught Me This Past Christmas