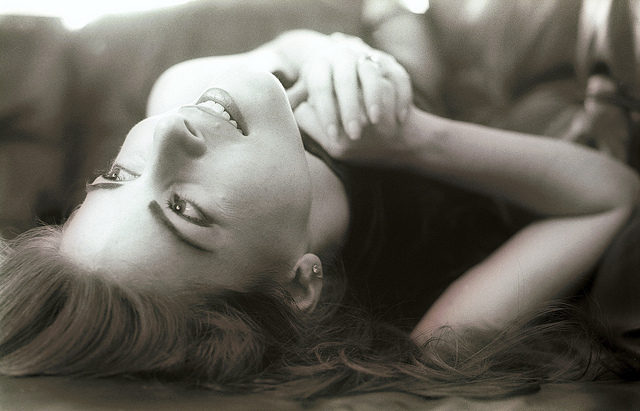 I was nine years old when my mother called during breakfast. I stood next to the kitchen bench, twisting the curly phone cord in my fingers, looking at the dark brown streaks in the wood paneling, trying not to let her hear how freaked out I was because she was so close to tears.

I could feel how hard she was working at trying to stay strong. I could hear how hard it was for her to talk because of the lump in her throat—the same lump that was in mine.

As my mother told me my little sister had leukemia, all I could do was nod and say “yes” and “okay” and wind the curly cord around my fingers and stare at the knots in the boards on the wall.

Her voice finally broke as she said goodbye.

After I handed the phone back to Nan, I sat quietly at the breakfast table. When they’d finished talking, my grandmother came to sit beside me, her eyes red and misty. She gazed at me for a moment and then said “you can cry—you know that, right?”

She was giving me permission to let go. But I also sensed that she’d handed me a permission slip with an expiry date. I had a window of opportunity to release all the emotion I was trying not to feel, but it wouldn’t be open for long. Soon, I’d have to pull myself together and get on with life.

But I couldn’t cry at breakfast time. I’d worked so hard not to cry for the past week, and on the phone with Mum, that the tears had disappeared. It felt like someone had poured concrete into my stomach. For about three hours, I walked around my grandparents’ house with my solar plexus locked up so tight I could barely breathe.

When something finally started to move, I noticed that suddenly the block of concrete felt less solid. It became a dark sticky mess rising up from my stomach through my throat. I felt like I was going to vomit.

I ran through the house and threw myself face down on Nan’s bed, sobbing my broken heart out into her pillow as my world fell to pieces. I wasn’t sure whether I would ever be able to stop crying.

I don’t know how long I lay there. But when the hiccuping sobs began to slow down, my grandmother came into the room and sat on the side of the bed and stroked my back. After a couple of minutes she said “There, that’s better. Now—let’s have some morning tea.”

Nan’s cure for everything was a cup of strong milky tea and a sugary baked treat. As I munched on my date slice, I decided I’d cried enough. I’d used my permission slip.

Crying all the time wasn’t going to help anyone. My grandmother obviously wasn’t comfortable with emotion—she always said if someone else cried, she couldn’t help but join them. So I wasn’t going to add to my family’s distress by letting them see how upset I was. Ever again.

From then onward, I rarely cried at all. When I did, it was brief and in private. I tried very hard never to cry in front of my family and I learned how to stuff emotions into my body and lock them up tight, so they wouldn’t leak out. Over time and with practice, I got better and better at it until, eventually, I hardly ever felt much at all. Whenever an uncomfortable feeling threatened to rise up, I’d automatically transform it into body tension.

I’d always wanted magical powers, but that kind of emotional alchemy wasn’t what I’d had in mind. Nonetheless, it was a form of magic—a powerful protection spell that kept me separate from my emotions and (eventually) from my body.

Let me be very clear: no one ever suggested it was my role to take care of my family’s emotional well-being. I invented that job all on my own, based on a complicated mix of my core personality traits and my story about the meaning of my position as the oldest child.

I never declared that I’d taken the job. To the casual observer, my behaviour probably didn’t change much.

But inside, I felt a profound change. My job was to be strong—to hide my grief and help our family carry on with daily life in the face of this nightmare unfolding around us. After a while, I didn’t have to try very hard. I had lapses, but overall, emotional control became my default setting.

In assuming responsibility for taking care of my family, I made decisions on their behalf that I had no right to make. At nine years old, I was doing the best I could, but I’m sorry I chose to handle it that way. This belief that I knew what was best for others was so strong that it took me almost 30 years to realize it was only a story.

Like most stories, it has not served me well in this life.

And here’s what I’m most sorry for: when I chose to put my family’s interests first, I also abandoned my own self-interest. I traded their emotional welfare for mine. I shut myself down and pushed the world away. It would take a long time—and the sound of my own suppressed pain would have to reach an ear-splitting wail—before those walls could begin to crumble.

The flash of insight that began to break those walls came at an unlikely moment. I was watching Buffy the Vampire Slayer (who, for me, embodies the ultimate warrior/protector archetype). This is what hit me: if I saw all parts of me—for example, my nine year old self, who decided to stop crying—as helpless, innocent, and needing my protection, how differently would I behave towards myself?

If I saw that younger me as truly precious, perhaps I’d handle her more gently. And if I understood that she’s not separate from my present-day self, perhaps I could see myself as someone worthy of protection.

It is clear to me now that I am my primary responsibility. I neglected that job for a long time. So I’ve stopped assuming that I know how best to take care of my family and started taking better care of myself.  Instead of trying to anticipate how others might be feeling at any moment, I focus on what’s happening in my body. And then instead of suppressing those emotions, I give voice to them. Even when I’m scared my grief will trigger sadness for others, I’ve stopped trying to protect them by hiding it.

I never would have believed that talking to my family about how I feel could create a sense of connection and deepen it so quickly, until I tried it.

Approaching 30 years after Virginia’s death—I need to feel all this grief, and it helps to write about it. Because I’m writing for her and me and all of us. And I’m writing for all the kids who are right now facing more pain than they know how to feel and who may find it helpful to hear that it didn’t kill me.

I need to write out the remaining broken parts of my heart, because I’m writing myself back to life. Holding my heart tenderly and acknowledging its unfelt pain feels like the ultimate form of self-love. And finding the courage to be vulnerable no longer feels like weakness, but like a source of strength and the ultimate form of protection. 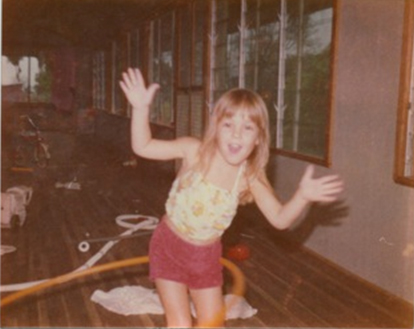 Belinda Noakes is a writer and courage mentor. She helps people find the courage to create meaningful change, specialising in helping executives navigate the transition out of a corporate career. Belinda passionately believes that lasting change is created less through grand sweeping gestures and more by making a thousand tiny brave moves towards who we really are and what we’re really here to do. She writes regularly about courage and compassion on her website and Facebook.