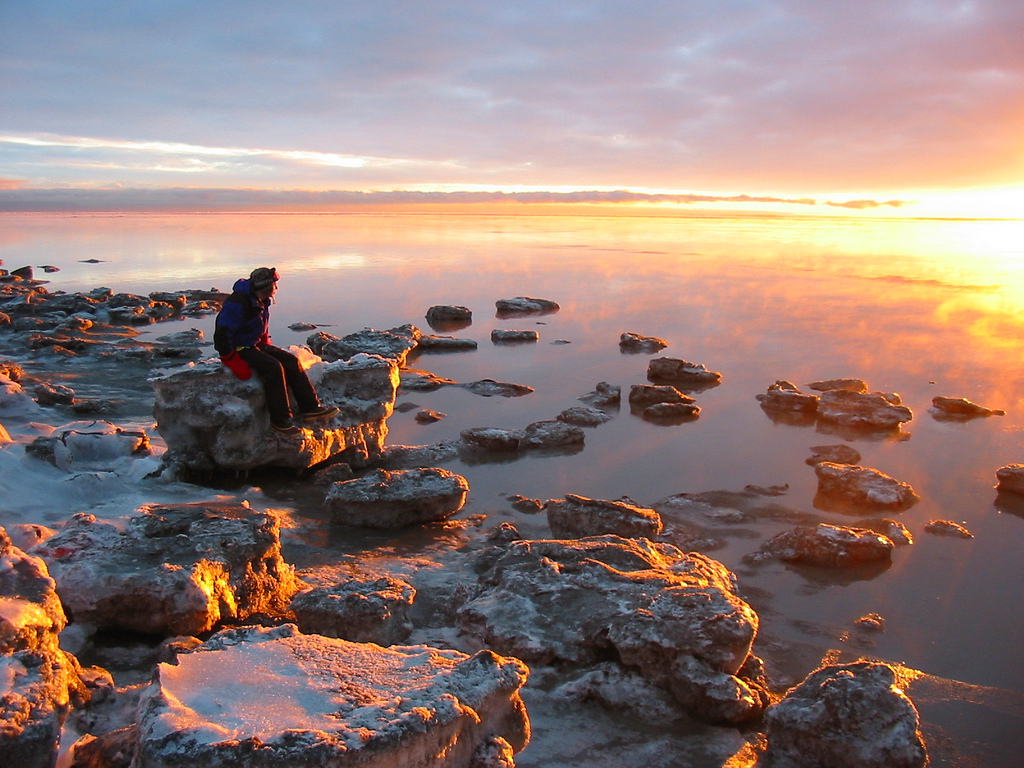 I met Scott some years ago on a cruise with my family. I have seen few things in my life that match the delight, relaxation, and overflowing aesthetic beauty of Alaska. The experience was enhanced all the more by our quirky Alaskan tour guide with an overgrown beard and an incredible story.

Scott grew up in Colorado and was enamored from a young age with the ecstasies and mysteries of the natural world. This interest led him to pursue education in the area of environmental science, with the ultimate hope of earning a doctorate and becoming a professor.

Having met Scott, I can say that he would indeed make an excellent professor. Articulate, erudite, enthusiastic, and humorous, Scott would light up a classroom, and any student would be fortunate to spend a semester in his care.

But, by fate or chance, Scott did not pursue his PhD nor become a professor. Though his dream seemed well-suited and within reach, another craving was welling in Scott’s being, and this longing would not be confined within the walls of an academic institution.

You see, Scott’s love for the outdoor world was not merely a love for learning about the Earth or gazing upon its forms. Scott loved to conquer its looming canopies, challenge its far-off depths, adventure through its heart and heights.

As Scott progressed through school, he still made time for life beyond civilization. He camped, fished, and skied avidly. From his accounts, though, I believe that perhaps his greatest joy was in mountaineering.

After receiving his Master’s, Scott managed to finance a two-year stint in South America, where he lived primarily in the mountains. All the while, his aspiration to professorship remained in the back of his mind.

He continued to travel and climb, working as a guide and ski instructor in Colorado. Eventually, he spent some time in Alaska, and quite unexpectedly, fell in love all over again.

Certainly the impressive landscapes of Alaska kindled a lust in Scott’s soul, but it was something much simpler which absorbed him and provided a moment of clarity—water.

The clear, silt-less river and stream water that flows in Alaska is pure enough to drink. For many people, this might seem a trivial or mildly interesting factoid. For Scott, it was something else entirely.

Knowing that he could drink the very water washing over the land connected Scott with a basic, but obscured, truth about his irrevocable relationship to the Earth. His appreciation for the provider, the planet, was deepened, and he felt he was where he ought to be.

Scott decided shortly after that he must live in this place that had gripped his spirit’s imagination. As American naturalist John Muir, who treasured the Alaskan world, once wrote: “The mountains are calling, and I must go.”

Scott devoured book after book about Alaska, seeking to learn all that he could about its history and thriving biology. Scott was becoming an expert, gaining knowledge that would allow him to create a sustainable life for himself.

For a couple of years, Scott was only able to afford to live in Alaska for the summer. He made a living as a guide during those mild summer months and worked in Colorado throughout the rest of the year. At some unknown point during that time, Scott also met the woman who would become his wife.

Eventually, Scott carved out a niche for himself as a carpenter in the off-season and was then able to live with his wife in Alaska full-time. Scott subsisted in an environmentally friendly way, building his own house, gardening, fishing for salmon, and living modestly. He and his wife were not rich in the sense of possessing the material extravagance that our modern culture associates with wealth, but they were unconcerned with such things.

They had followed the path of a decidedly contrary treasure, one that dwells in the heart rather than the pocketbook—love and appreciation for each other and for the planet that bore them.

As time passed, Scott still clung to the remnants of his old academic dream. A part of him yet desired to educate in a formal setting, to share his thoughts and passion for the betterment of others.

One day, though, after guiding a group of travelers, Scott was struck by the words of a woman in his group. “Wow,” she said, “That was really something. I can see now why we need to preserve these places.”

Then, Scott understood that sharing his knowledge and excitement would not be most impactful in a classroom. Scott saw that he was teaching others, in the very temple that sustained his life. He realized that, through his work, he could show others his sanctuary and do his part to save it from society’s destructive greed.

Scott found contentment in that purpose, and he has lived in Alaska for the last 15 years with his wife and their now 2-year-old daughter. Though he didn’t end up in the dream he’d once envisioned, he wound up living one that was, perhaps more completely, his own. His heart, it seems, did not forsake him.

Scott’s story inspired me deeply and I thought of him many times since our meeting.

It’s one thing to hear people say, “Pursue your dreams!” and “Follow your bliss!” It’s another thing entirely to meet someone who has actually done so. From Scott, I’ve learned some valuable lessons about how to live a satisfying life. I’ve learned that…

Instead of needing to map out my entire life, I can focus on paying close attention to what I feel day-to-day in my depths. I’ve learned to ask myself if I’m enjoying the details of my life and remain open to uncovering a newer and more exciting passion or vision for my life. I have many notions of what I may do at different points in my life. I no longer try to pin down one specific thing. I find this approach to be liberating and more realistic, rather than a source of anxiety.

2. I have to do my own thing, even if it’s uncommon or unpopular.

Many people are blinded by their ideas of what success looks like. Even Scott’s dream of professorship was based on what would be “prestigious” or would make other people happy. Now, his uncomplicated life in Alaska may strike some people as less desirable or impressive, but he didn’t chase it to please others. He did it because it filled him up in a way that nothing else could.

Scott isn’t living a life of excess. He does without many of the luxuries that would be considered necessary in affluent societies. Yet, he struck me as one of the most self-actualized and satisfied adults I’ve met. I think this is because Scott has a true appreciation for the joys of the natural world, for his life, and for the love of his family and friends. Nature and love are all he needs. I’ve learned that, if I cannot find peace in just those things that are free and/or necessary, I will never find it in any amount of decadence or accumulated goods.

4. Travel is an amazing tool for self-awareness.

If Scott hadn’t allowed his passion for mountaineering to take him thousands of miles from home, he would not be where he is today. He would never have tasted the ice-cold stream water that aroused his conviction to live in Alaska. That is why I think it’s essential to travel to distant places and pay close attention. Venturing into the unknown re-orients my inner compass toward what I deeply love.

When I think of Scott and his amazing story, I remember this quote:

“If you do follow your bliss you put yourself on a kind of track that has been there all the while, waiting for you, and the life that you ought to be living is the one you are living. Follow your bliss and don’t be afraid, and doors will open where you didn’t know they were going to be.”
~Joseph Campbell
(Photo by Paxson Woelber)

Journaling: How I Learn About Myself

In the Internet multiverse, Refine The Mind is a planet for freethinkers and daydreamers. Jordan Bates is the creator, a journalist at Beacon, and the alter ego of Lostboyevsky. He savors time in the woods, dangerous ideas, and all things artistic. Read the mission and follow him on Twitter and Facebook.