Nathalie suffered with severe eczema but finally found a way to calm her irritated skin. Here’s how she relieved her eczema and came out of her shell. 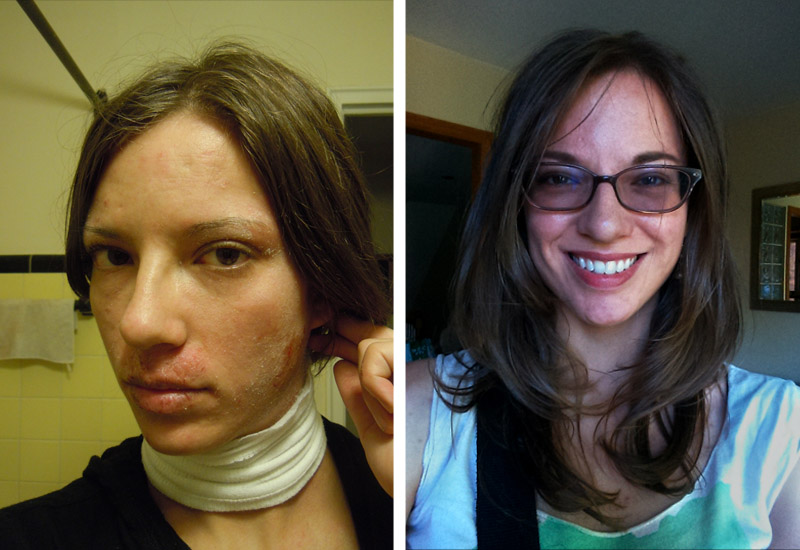 Nathalie’s eczema on face: before and after

When I moved from my hometown to a much bigger city, I knew it wouldn’t be easy. I anticipated the challenges that came with leaving the nest. I was not, however, prepared for eczema to flare up and spread to almost every part of my body.

I always prided myself on being able to handle anything thrown my way. At least, I thought I could. In reality, I wasn’t handling anything at all.

Throughout my entire life, I had been bottling my emotions, thinking that this was how you dealt with them. I never learned to release the negative ones in a healthy way.

With all of the stressful change that came with the move, it was only a matter of time before I learned I couldn’t keep bottling my emotions forever. They all had to come out in some way, and they did so physically.

I wasn’t too concerned when I first saw the small patches of dry skin appear here and there on my arms or on my hands. I figured it would simply go away over time.  But it didn’t.

I felt ashamed about the way my skin looked. To release this stress, I would pick and scratch at the eczema, causing it to worsen, which only exacerbated my anxiety.

The vicious cycle had begun. The small patches on my arms became an expanse that almost covered my entire body, including my face. 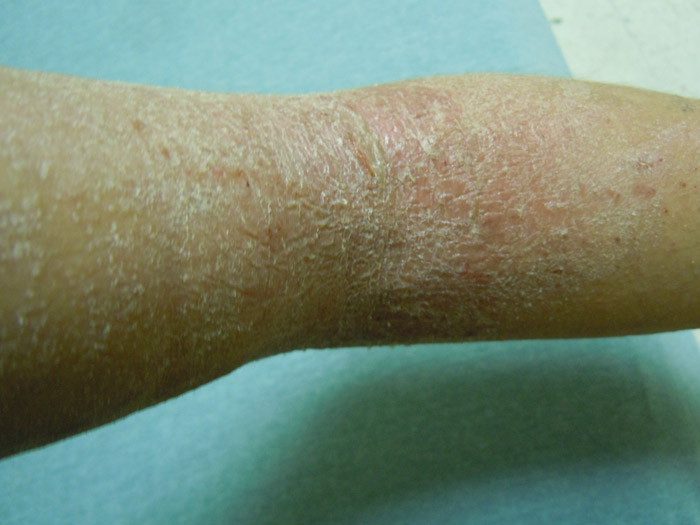 Nathalie tried everything to cure her eczema (seen here on her arm). She tried every miracle product and magic potion.

I sought help from different doctors but it took weeks, sometimes months, between appointments. At every waking moment, I felt like a warrior fighting a battle that could never be won. It was me versus my skin.

My skin got progressively worse. Each doctor gave me different diagnoses and nothing they prescribed seemed to help.

Natalie tried everything to cure her eczema

I spent a fortune on product after product that claimed to be the miracle I was looking for, and while each one helped for a bit, the relief was always temporary.

My skin became very dry, thin, and brittle. Movements were painful as they caused my skin to split open in some areas and weep.

I walked around in public wearing bandages, aware of the concerned stares of the people around me.  It felt like I was being constantly judged and examined, making me wish I could sink into the background.

They would look at me with the same morbid curiosity that people have when driving by the scene of a car accident. 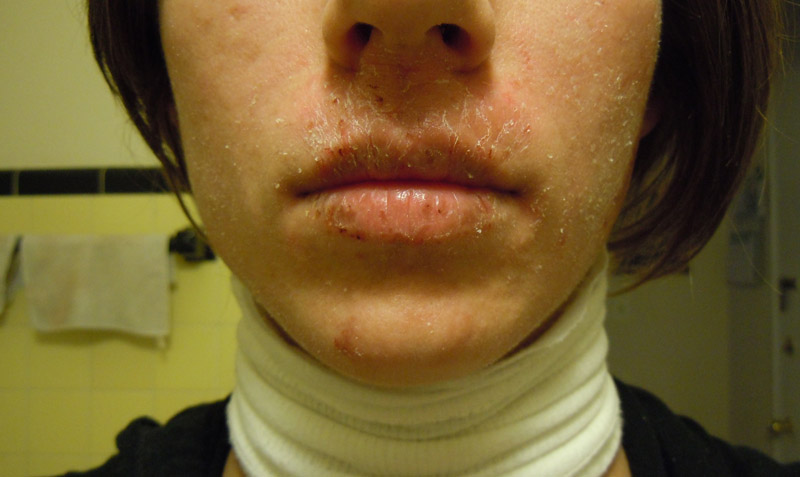 I was always searching for the next possible cure to try, the next miracle treatment, as if the solution to all of this was just one product away.

The worse my skin got, the more desperate I became to find something that would heal it. Little did I know, I was looking for an external solution to an internal issue.

Finally, one of the doctors I was seeing said, “I am giving you the strongest treatment I can, but it’s not helping. You need to go to a hospital.”

I remember waiting at the hospital for three hours to see a doctor, anticipating that someone would finally be able to tell me what was wrong.

Once my turn finally came, he simply told me: “You’re going to have to make an appointment with the dermatology department.” My heart sank when I realized I would have to wait again before I might get an answer.

I will never forget what happened next.

By the time I stepped out of the hospital, my emotions had reached a breaking point. For months and months, I had tried to control as much of the situation as I could, which was wasted effort considering most of it was outside my control anyways.

All of the pain, the frustration, the anxiety, the uncertainty, everything I had struggled with came bursting forth from the depths of my psyche, smashing through the walls I had subconsciously created to keep it all buried.

The weight of everything I had been holding on my shoulders finally became much too heavy for me to bear, and in a moment, I let everything go.

The first step to healing her eczema

It was intuitive, in the same way that if someone puts a piping hot object in your hand, you don’t need to be told how to let it go—you just do.

I finally accepted that there was no magic, miracle cure and that I might struggle with this for the rest of my life. I surrendered to that possibility.

For the first time, I chose to accept what was happening, rather than resist it.

Was it an ideal situation? Of course not. Would it be challenging to continue living with severe eczema? Absolutely.

But I realized that my resistance was obviously not healing my skin, so why continue to fight what was happening?

It’s not as if I had any more strength to do so, and I was constantly drained from trying to fix the situation. Why not just accept it, handle it to the best of my abilities, and let go of everything else I couldn’t control?

After that decision, I felt more peace than I ever imagined I would feel again.

What finally led to relief from eczema

My patience was rewarded soon after, when I received a call saying I had been accepted into the short-term cognitive behavioural therapy (CBT) program at Mount Sinai Hospital (for which I had been on the waitlist for some time).

I scheduled my appointment with the hospital dermatology department. The doctor who saw me was shocked at how bad my skin had gotten, but he was optimistic in being able to treat me.

To help with the skin infection that had set in, I was prescribed antibiotics, two different types of anti-itch pills, special bath oil, and two large tubs of steroid creams each for different areas of the body.

At least twice a day, I had to soak in a lukewarm bath, then dry off and apply all of the creams to my skin, covering my whole body with a layer of Vaseline.

It was laborious, but for the first time I noticed real improvements.

Medication was only part of the treatment

Without the second component of my treatment, the therapy, these pills and creams would have just been another temporary solution. In the CBT program, I discovered the emotional patterns that made my eczema so much worse.

For example, I never realized before that my thoughts create the emotions that I feel, which in turn influence my actions.

I also began to recognize my negative thought patterns, so I could learn to choose thoughts that are more beneficial to me and help transform my mindset into a more positive one.

Until these therapy sessions, I had no idea that the vast majority of all suffering in my life was self-created, and thus avoidable.

Between the therapy, the medicinal help, and the ongoing pursuit of healthy habits, the healing that followed over the next few months was nothing short of remarkable.

The large patches of eczema continued to shrink until they disappeared.

Today, my skin is mostly healed, and it is with profound gratitude that I realize just how often I thought this would never happen.

I still get small patches of eczema sometimes, but only when my body is trying to communicate with me that perhaps I need to release some negative emotions, or watch my thoughts more closely, or even just reduce my coffee intake.

This experience truly helped me understand that, while it is true that I have no control over a great deal of what happens to me, I always have a choice in how I react.

I could have let this challenge defeat me, but I persevered until I overcame it. Today, I’m actually thankful I’ve gone through this because of the person I’ve become as a result.

When I reacted with resistance and denial at my situation, I was miserable. Life felt like an uphill battle.

When I practiced acceptance instead, it was like floating down a river, and suddenly life began to work with me rather than against me.

Or, is it simply that I had been working against myself all along? 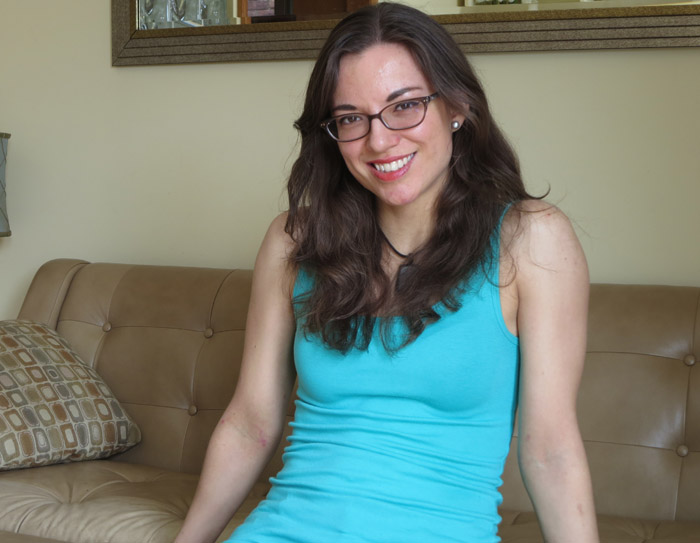 Learn more about what can be done to heal and soothe eczema. 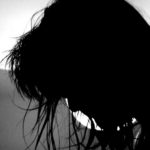 How I Overcame Depression and Found Peace

Nathalie Delorme has been on a journey to transform her mindset from a negative one to a positive one, shifting from self-loathing to self-love. It is her passion to help others experience similar shifts in perspective, so that they can increase the quality of their relationship with themselves, and the world around them. She can be contacted via her blog.