Earlier this year, I was walking around the city of Ahmedabad with my father, when an 18-year old boy named Babu Rajwadi approached us. He asked if he could polish our shoes in exchange for two rupees—equivalent to roughly 3 cents.

Of course, both my father and I agreed. Two rupees is close to nothing, and I’m a firm believer in helping out those who are less fortunate than I am, especially when they are working hard to positively change their futures.

As soon as my father and I nodded in approval for Babu to polish our shoes, a look of excitement flashed across his face. He was endlessly proud at his success in landing a new “job.” Not wanting to let the opportunity pass, he quickly pulled out a broken brush and a tiny can of black shoe polish from a rolled up grocery bag in his pocket.

It was obvious that Babu was dirt poor.

Poverty in India is widespread. It is common for people to ask for money in exchange for random tasks. However, there was something different about this kid from everyone else I had seen in the past.

As he started polishing the shoes, Babu started thanking us for the opportunity we had given him. He spent a solid five to ten minutes making sure that he did a thorough job of removing every single mark on each shoe. During that time, we chatted with Babu about his life.

It turned out that the boy had lost his father just a few years earlier due to health problems. As a result, Babu was officially considered the “head of his household.” He had a mother, three brothers, and two sisters. He was the oldest out of his brothers and sisters, so they all relied on him for support.

His entire family was struggling financially. Yet, he had a vision of one day buying a special box filled with all types of shoe laces, threads, and colored polishes, so he could offer his services to more customers and make additional money to support his family.

Out of curiosity, my father and I asked Babu how much the special box of shoe materials would cost. He practically had the number memorized.

Nine hundred rupees is only about $13.20—basically what the average Westerner spends on a meal at a restaurant.

“I make about 50 rupees total every day, Babu responded, “and I have to use that money to pay for my bus fare and buy food for my family, so I’m not able to save anything.”

“How much more money could you make if you had that special box full of shoe materials?”

“I could easily make up to 300 rupees per day. Right now, most people don’t trust me to polish their shoes since I only have one broken brush.”

Without any further hesitation, my father and I made up our minds to buy the shoe materials that Babu needed to expand his business. I honestly thought Babu was going to break down into tears when we told him what we planned to do.

We all went together to a small shoe store and bought everything he needed. Before we parted ways, Babu also asked me if he could see a dollar bill from the United States. He had never seen one, and he thought it would be a great gift for his mother.

After being able to spend that much time with Babu and hear his story, I have no doubt that he will be successful in the future. His work ethic was unique. If you ask me, a $13.20 investment to potentially turn somebody’s life around is worth every single penny.

What I thought was most remarkable about Babu’s story was the fact that, in the time that we spent with him, I did not hear him complain once. Even when he was saying that his father passed away or that he had very little money, not once did he show any sign of negative thinking.

Instead, he seemed grateful for everything he had. He talked about how amazing his mom was. He bragged about how great his younger brother was becoming at polishing shoes. I think most people in his situation would sit back and feel sorry about how unlucky they were.

Babu lived such a simple and humble life, but one filled with the most happiness I have seen in a very long time. Babu taught me just how simple the act of giving back can be—that there is no need to be flashy about it and even a seemingly insignificant donation of my money, time, or physical effort could change someone’s life. 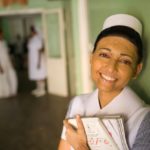 The Nurses Who Gave Me Hope

Nihar Suthar is an award-winning writer, covering inspirational stories around the world. Learn more about him, his work, and his mission at www.niharsuthar.com